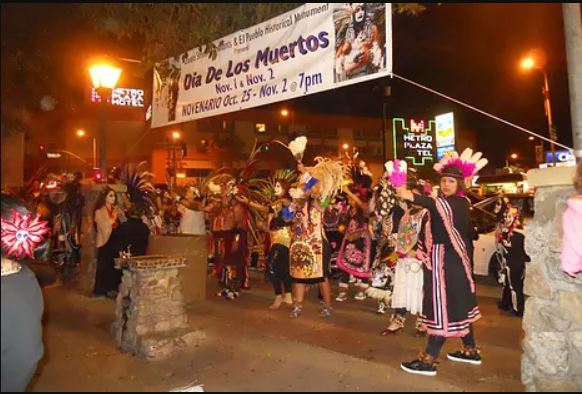 ARS
October 22, 2018
Los Angeles
In the center of Los Angeles’ cultural history and near the center of the downtown, lies Olvera Street. It is the oldest street in the city, and one of its special events always occurs in the fall.

For more than 30 years, Olvera Street has celebrated Dia de los Muertos or the Day of the Dead. It fits in with the culture of Olvera Street and celebrates the pre-Columbian, Aztec, Mayan, and Catholic rituals surrounding death.
The thought is to celebrate the life that was, not to mourn for those we’ve lost. Death is, after all, a natural part of life.
The nine-day festival commences on Thursday, October 25. Each day at 7 p.m. a procession travels the street. The traditional Mayan soul cleansing is offered to those wishing to participate. View the community altars, built to celebrate those who have passed on. Live entertainment is provided daily and face painting is available.

Olvera Street is part of the El Pueblo de Los Angeles Historic Monument and is located in the oldest part of downtown Los Angeles. The original Avila Adobe, built in 1818, the Pelanconi House, built in 1857, and the Sepulveda House, built in 1887 still stands, despite the city’s growth surrounding them, and Mother Nature’s earthquakes.
While Olvera Street defines special annual events such as Dia de los Muertos, Las Posadas in December, and the Blessing of the Animals in the spring, each day may bring something different to the street. The outdoor marketplace is known for its food and shops offering a variety of items in Spanish-American culture. Open daily, there are seven museums here and an always changing musical environment of mariachis and dance.
Serving the Los Angeles area, Appliance Repair Specialist is happy to share a variety of LA happenings through our blog. We are also glad to help you with your appliance repairs throughout much of the city, from the San Fernando Valley to downtown and Olvera Street, and out into San Bernardino County as well. Appliance Repair Specialists are the top in their field providing experienced and expert care in repairing your washing machine, dryer, or refrigerator of any make and model. If you’re having an appliance problem, be sure to schedule service today!
Sharing