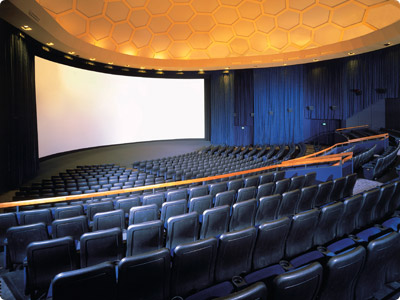 Los Angeles is famous for making movies, but our city also has some very interesting places to watch them too. Here are 5 of our favorite theaters for families, film buffs, and more.

It may be the most famous movie theater in the world, and now its technology is as special as its history. Some people still call it Grauman’s, but it has gotten a new name and renovation in partnership with TCL, a major Chinese electronics company. Take a VIP tour to celebrate the glory days including the famous Forecourt of the Stars, and catch a movie to see and hear the difference that IMAX with laser projection makes. (TCL Chinese Theatre, Hollywood)

They like to call themselves the most entertaining place on the planet. They are the first 4DX theater in the country. That includes motion seats and special effects like weather and scents. You can smell the coffee and feel the wind in your hair while your seats heave, roll, and pitch. It won’t cost a lot either with $9 Tuesdays every week. (Regal L.A. Live, Downtown)

The roof looks like a golf ball, but it’s a geodesic dome design from the 1960s. Today, it’s part of the ArcLight Hollywood group, continuing a 50-year tradition of making viewers feel like they’re surrounded by the moving picture. (Cinerama Dome, Hollywood)

It’s like going back in time watching silent films accompanied by a 1925 Mighty Wurlitzer Theater Pipe Organ. In addition to vintage silent and sound films, they also host live concerts with popular music from the past. (Old Town Music Hall, El Segundo)

This Disney theater started life as a playhouse in 1926. Today it shows Disney films new and old, including sing-alongs for kids. Try the Tiny Tot Tuesday Program where dim lights are left on and the sound is reduced. (El Capitan Theatre, Hollywood)

Appliance Repair Specialist serves the central California region including Los Angeles. Contact us to get your appliances back up and running like new.